With an unusual and practically useful design, the AOC e2060Vwt monitor makes touchscreen monitors affordable without compromising on quality.

A 20 inch touchscreen monitor might be the last thing on your list of computer items needed this year but if you are using Windows 8 and planning to buy a monitor then you are in the right place.

AOC recently introduced a 19.5 inch touchscreen monitor this month which is priced not very far from a normal 20ish inch computer screen. The LED monitor comes at a price tag of Rs 10,499 and consumes just 18W of power in running mode.

We gave it a test run to see what it got. 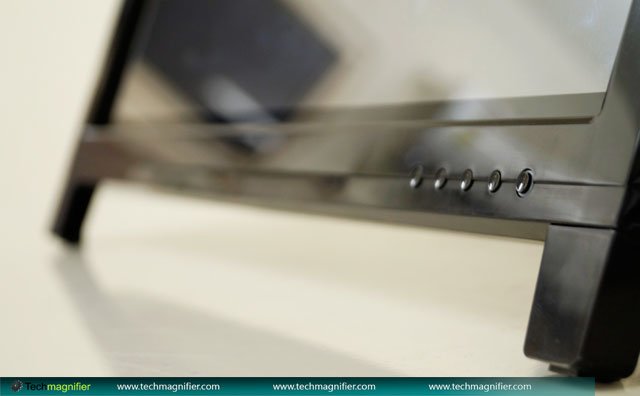 If you like monitors with thin bezels or negligible plastic on the screen periphery then unlike the AOC LE23A6730, the AOC e2060Vwt might disappoint you. It’s made with strong plastic but it’s fitted with lots of it and the front side speaks all.

If not very good-looking, bestowing it with a borderless front would have made it costlier.

Instead of a single hinge mount, the screen is put in a bold frame with two legs to support it vertically. At the back is another hinge that allows the monitor to be laid back/ tilted to adjust the viewing angle in the YZ plane. The screen can go from 90 degrees to the almost facing the ceiling.

It also has a VESA wall mounting option but with the legs hanging out of the frame, it’s going to look very odd. But if placed on the table it leaves enough space for cables to pass through and space around it to be kept clean. 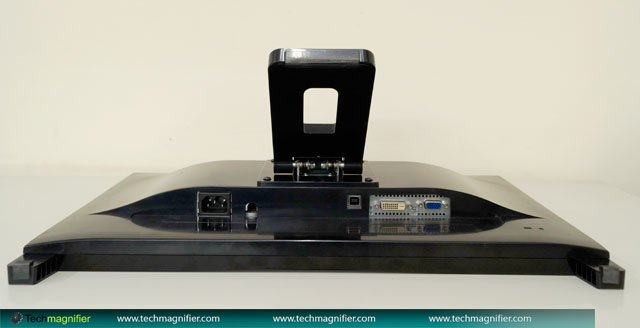 The input cables are placed at the back and are bottom facing so the attached cable comes out downwards and away from the monitor. It supports VGA and DVI-D connections but not HDMI. There’s a USB port that connects the monitor to PC for touch input communication. It’s plug-and-play so you wouldn’t need to install any drivers.

The menu buttons are lined horizontally at the right bottom side. The power key is fine to work with but the other keys play a great spoilsport. Most of the times I didn’t dare brighten the screen fearing I might hit it with something if it didn’t work one more time. Worse, they aren’t even marked for the function they perform. The costlier Dell S2240T stays ahead in this aspect; you haven’t seen the best thing this monitor is known for.

AOC e2060Vwt has a resolution of 1600x900. You might not have come across this resolution size but it’s fairly common with monitors mimicking 16:9 screen ratio. As far as the display vividness is concerned it can be said without loss that it leans more towards a 1080p (Full HD) screen but is not exactly it.

The screen has a contrast ratio of 1000:1 but it so bright and vivid, especially for a computer monitor. The black levels are good and it creates a really sharp image by tweaking the menus through those unfriendly buttons. 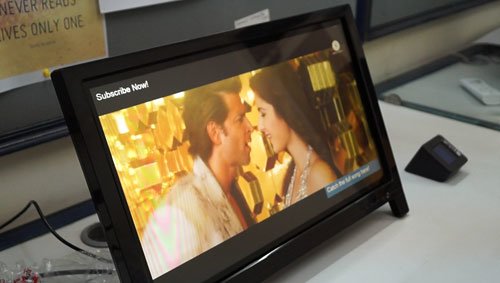 The reason it maintains such sharp quality is that for one it’s an LED screen (backlit off course) that is optimized by AOC for color reproduction. Secondly the screen is glossy which makes this optimization more effective. It has its side effects of being reflective but this is where you would need to tweak it from the Picture Boost options. Also there is a movie mode and plenty of other presets to take care of different situations. Mostly, you will need it while watching movies as the ambient light affects the dark scenes. You might need to switch them off sometimes.

Using a touch screen changes the way you use the computer altogether. Especially with Widows 8 the experience takes a different note as you can glide though menus; pinch to zoom; slide from side to bring up background windows.

We used the back of a pencil as a tool to write using the Microsoft On-Screen keyboard as the screen surface felt really tough. You might mistake it for a hard pressed resistive type screen but the touch response is really smooth. I can safely say that it is as responsive and easy going as a present day smartphone’s.

The touch screen monitor market is not really a competitive one in India currently but still the AOC e2060Vwt holds strong on the grounds of quality and cost effectiveness. Though it supports single point touch and the menu button are not the friendliest to use, it has everything else worked out really well. The monitor is well-built and touch response is surprisingly smooth. Even if the touch screen capabilities of AOC e2060Vwt are ignored, its color reproduction, black levels and brightness capabilities are more than enough to justify the price tag.