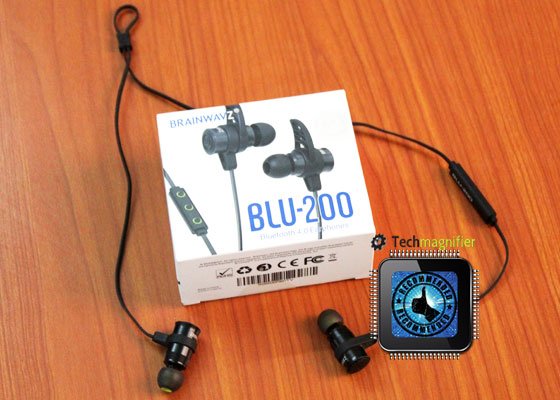 The Blu-200 is a solidly built second generation earphones from Brainwavz in the series that seems perfect for the active listeners, but still desires for better battery backup.

The Blu 100 from Brainwavz was an interesting pair of erarphones that defined the innovation at its best when it comes to sound technology. Of course, Brainwavz Blu 100 wasn’t the first Bluetooth Bluetooth earphone made, but with no doubt it was one of the best Bluetooth in-ear earphones engineered- something good in budget and something that can be defined as second to none when compared to other expensive earbuds. And since then, it has been in my favourite list when it comes to reasonably-priced IEMs.

And now, the company has brought back its Bluetooth Blu wonder, though with some upgrade in both specifications and design, offering a first rate innovation in the earbud space. This year, Brainwavz is set to lure the audiophiles and active listeners with its BLU-200. The latest from Brainwavz is the second generation Bluetooth earphones. While the Blu-100 was launched for the price of Rs. 2799, the upgraded Blu-200 is available for few hundreds more costing Rs.3499. Let us find out if the successor is worthy of same accolades that its predecessor received? 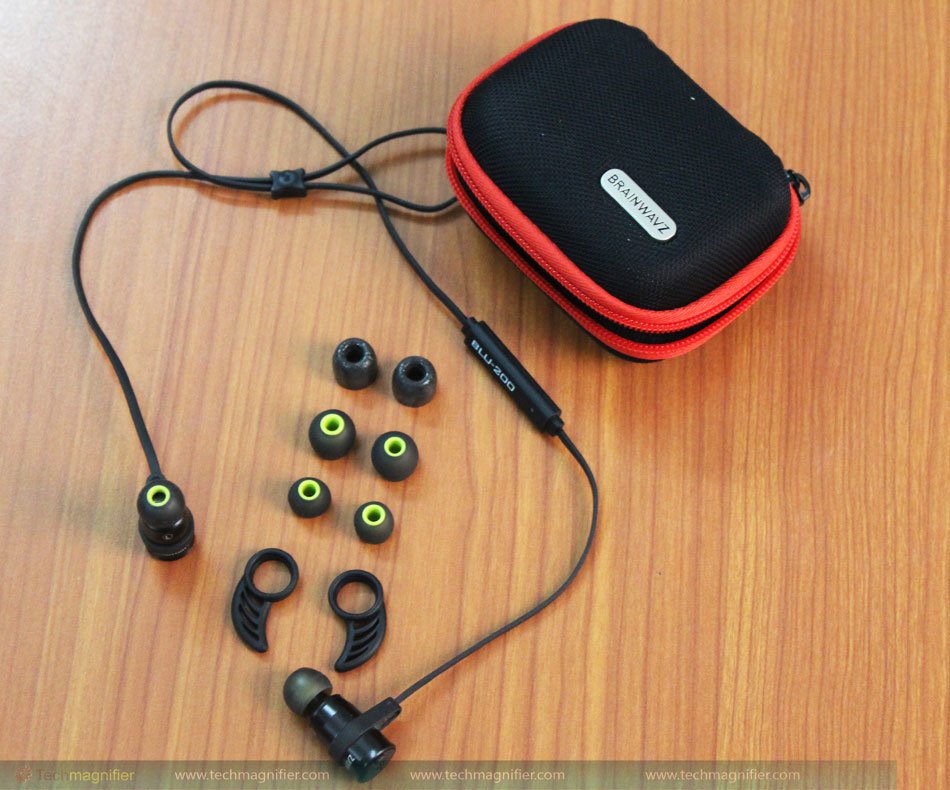 Trust me; if the earphones you are investing money on don’t come with set of bundled accessories, then it is not worth spending your hard earned money. But that’s not the case with Brainwavz. Like its predecessor, the Blu-200 to come packed with all needed accessories one would require:

The build quality of both Blu earphones is impressive, and my last year’s Blu-100 is still intact. Compared to other Bluetooth earphones I used, Brainwavz’s Blu-100 lasted more than 6 months, and still working. So I can totally rely on Blu-200’s build quality as it comes in stylish matt black aluminum casing that makes it pretty durable. The earphones are solidly built with a bullet-like design, and include Brainwavz branding engraved in the left one and the USB charging slot with rubberized flap on the right one. Further, to make things simpler, Brainwavz’s latest earphones come with two indications of left and right earpiece. One is on the top of both the casings, while other R & L signs can be found under the earpieces embossed on the hinge connecting the cable with earpiece. Further, despite coming with 60mAh battery infused inside the right casing, Brainwavz has managed to balance the weight of both earbuds perfectly well. The hinge has also been well designed and solidly placed. Just like the last year’s Blu, the cable that connects the two ear pieces of Blu-200 is light and felt durable, making it compatible for active lifestyle. But make sure, how well made they may be, some extra force is sure to break the cable from hinge. 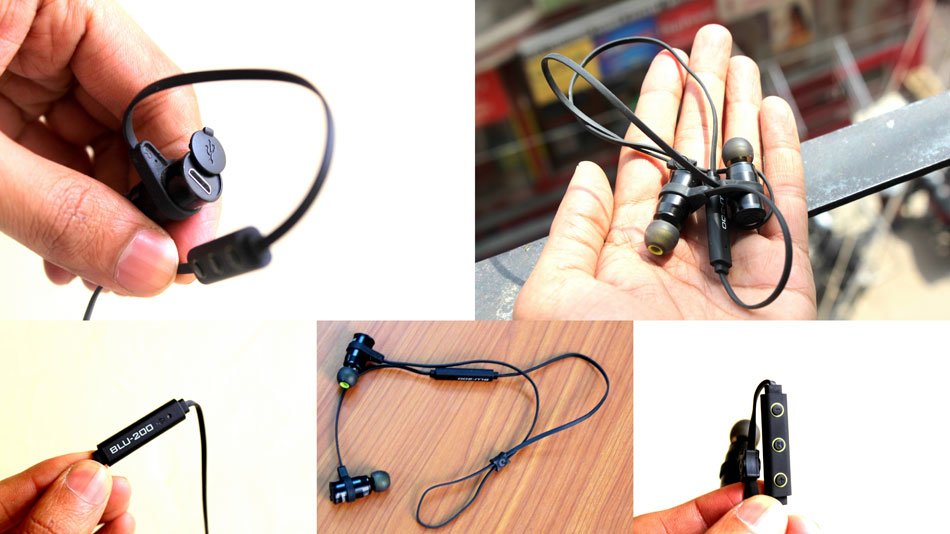 Further, the in-line remote includes three functional buttons with light-green contrast rings surrounding them all, just similar to Blu-100. The top and bottom buttons are used for volume control, while holding the same buttons for a second changes the music track. The middle button is used for Play/Pause/Power/Pair; while double press it to access the last dialed contact and receive incoming voice calls. Each button has a good tactile feedback. There is a Blu-200 branding is on the back side and a microphone input. Also, at an unnoticeable location near the top button at the conjunction is the indicator light that blinks while pairing, connecting or charging the earphones.

There is a small adjuster on the cable that effectively keeps the cable in place around the neck and offers a more secure fit while working out and jogging. The cable of Blu-200 is flat, which makes it tangle-free. And then, Blu-200 comes with detachable ear hooks that ensure absolute secure fit and provide a cool look to the earphones. Coming to comfort, the silicone ear tips provided with Blu-200 offer secure and comfortable fit and Comply foam ear tips are squeezable and provide perfect and comfortable noise reduction. 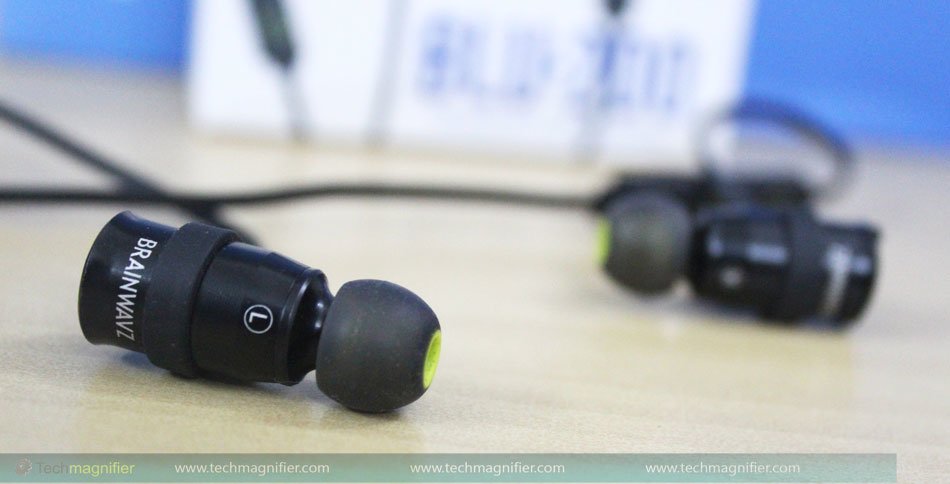 Pairing the Blu-200 is simple, and I am sure we are all well aware of how to pair a Bluetooth device. Further, what matters for an earphone is delivering consistent sound quality with a balance of music and vocals; and Blu-200 is capable of delivering just about that. These are clearly sports oriented earphones, and totally meant for use on the move rather than satisfying the needs of audiophiles. It comes with 9.2mm dynamic drivers and Rated Impedance of 16ohms Closed Dynamic. This new Blu earphone operates in the frequency range of 20-20,000Hz and uses Bluetooth 4.0 (CSRBC8645) with aptX to resettle the sound to the sound blending chamber, and it manages to enhance the audio quality. 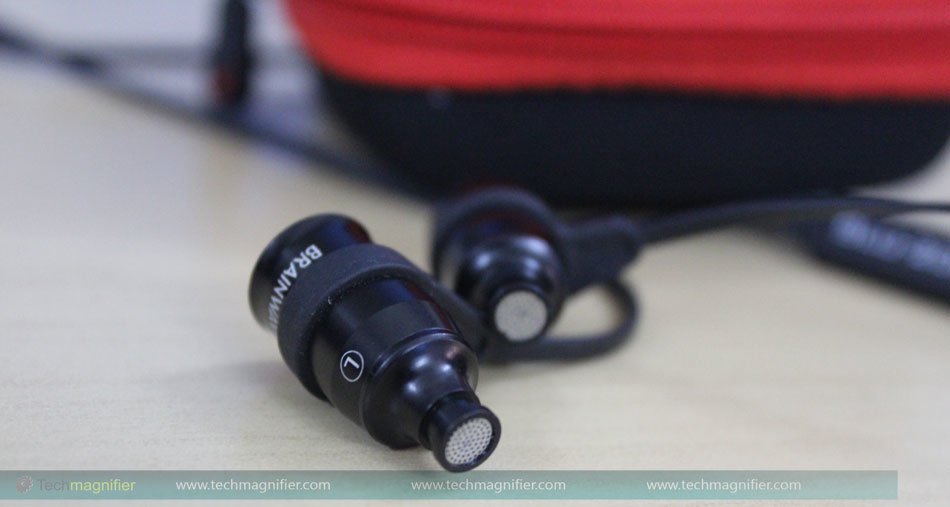 The sound performance is exceptionally good as you would expect from a 3499 bucks Bluetooth earphones. Tuning has been geared more towards bass desiring listeners, and just like other Brainwavz earphones I have tried, Blu-200 too delivers decent amount of bass. The earphones are without a doubt bass intensive and one can feel that pumping effect. Further, the mids are crisp, clear and have gentle depth but. The highs are decent and felt balanced in most of the songs, and the lows felt good but not the best I have heard. Further, the isolation is decent enough, and right sized ear tips play an important role in blocking the outside noise while in bus, market or while exercising.

The microphone works quite well, and offers good, loud and clear call quality along with in-ear noise separation. The person on the other end of the call could hear the voice without disturbance. The 60mAh battery is claimed to deliver 4 hours of continuous usage with standby time of 100 hours. In our test, compared to Blu-100 (2.5 hours), the Blu-200 managed to last for 2 hours 40 minutes; and it still takes a good 2 hours to get fully charged. This is the only minus point in Blu-200, and so was in Blu-100. 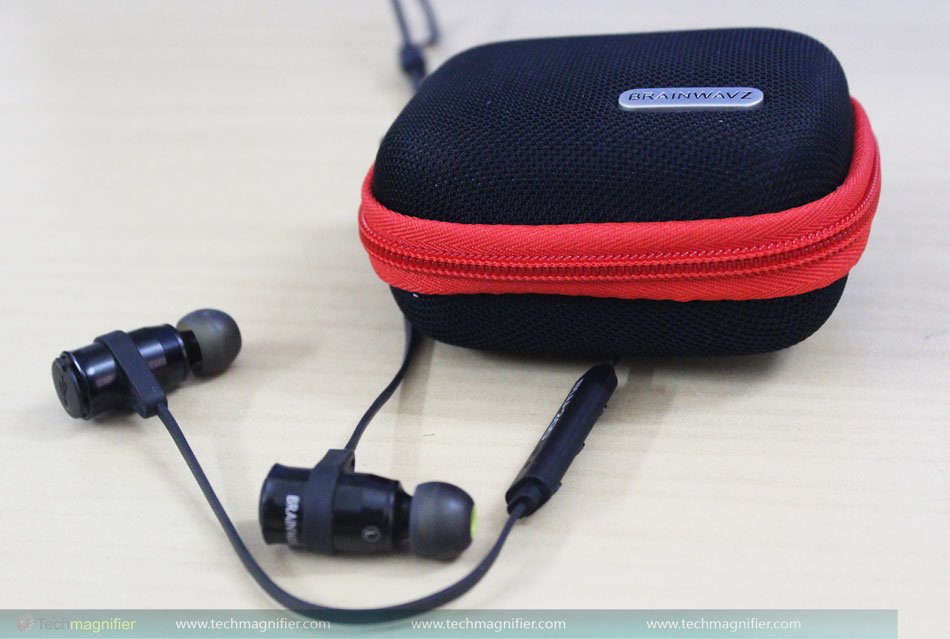 The Brainwavz Blu-200 is comfortable, well-built, decent sounding Bluetooth 4.0 earphones capable of delivering an imposing sound performance with rich and deep bass. Moreover, under 5000 bracket, Blu-200 is a good steal, and can be considered as a worthy alternative to several expensive Bluetooth earphones. Battery life is one thing that might disappoint you, but if you are looking for a good Bluetooth earphone for reasonable price, then Blu-200 deserves attention.