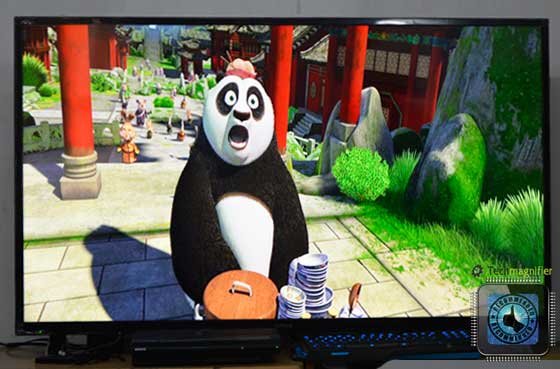 InFocus II-50EA800 is a 50-inch LED backlit TV with no smart capability. But priced aggressively, the TV has a bright panel with soft color output and good contrast. There’s nothing major that blots it, or sets it apart either.

The TV market has seen newer brands entering the online space with a varying variety of resolution and sizes being offered at competitive pricing.

InFocus II-50EA800 is the 50-inch option among a series launched by InFocus recently in India and is the part of company’s ‘free home demo’ scheme. The company has made its mark in the smartphone arena and though US based, has Taiwanese roots pertaining to the TV segment. The TV is covered under a 12 month onsite warranty and available online only for now.

Though the 50-inch TV gives you the most screen size for your money, there is Vu 127cm Full HD TV and several others companies offering TVs built on the DLED. The II-50EA800 is priced at Rs 34,999 which is a surprising price for TV this big. We look out for the scope.

If you didn’t knew already, a TV can have majorly two ways in which the backlight (read LED) can be positioned. One is placing an array of LEDs along the edges of the TV and getting it through the panel via a reflector diffuser set placed behind it. Second is by placing the array of LEDs directly behind the panel. They might be a Full Array with dynamic control of individual or cluster of LEDs or simply Direct, acting as a spread out light source.

The Edge lit TVs are thinner due to closer packing of the light and panel, but they are costlier to manufacture. DLEDs on the other hand have a simple parallel arrangement of light and panel which makes them thicker. But more importantly, they are cheaper to make. It is in fact the cheapest LED TV technology ever made.

InFocus II-50EA800 is made out of a stock design that we have seen on many TVs before. It has a strong casing made mostly out of plastic, mounted on the two “feet” on either side requiring over 4ft wide free space on the table, unlike a single stand mount. The connections are on the back, the HDMIs, computer connection and headphones facing downwards and composite, USB facing sideways.

The TV doesn’t ship with a wall mount but has a provision for the same.

At this price, the build quality of the TV is satisfactory. With small bezels and stock design, the TV may not look fabulous, but it doesn’t vibrate on full volume and the thickness of the material tells you it’s long lasting. 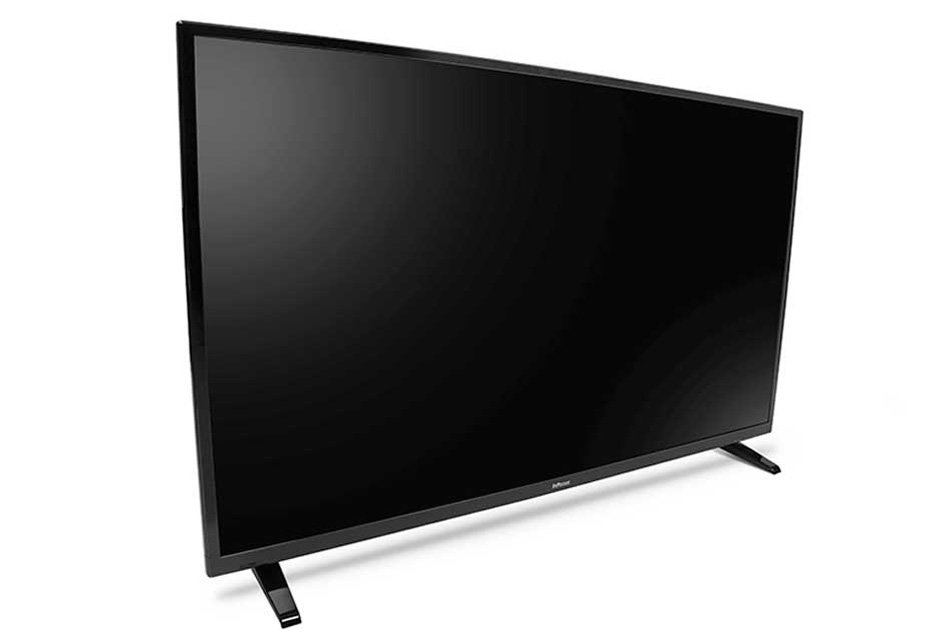 The IR receiver is placed on the left most end, which is not the best place to put it. Had it been in the center, in place or around the InFocus logo, the remote controller would have worked flawlessly.

InFocus EA800 ships with a single medium sized controller with a simple layout of buttons. Keys are made of rubbery material and are not specifically tactile. There are dedicated buttons for switching to particular connections, USB playback controls and for DVD. Control buttons are present on the TV as well, at the bottom to the rightmost side.

The TV has two down firing speakers also placed at the bottom of the panel. Each has 8W power for stereo sound but only sufficient for normal TV viewing. The sound isn’t very powerful, though nice in quality and loud. On several occasions, mostly on USB playback, the TV surely needed dedicated speakers. If you are buying a big TV in this budget, we recommend using the saved money to pair it up with a sound system, if you don’t have one already.

USB, HDMI and other connections 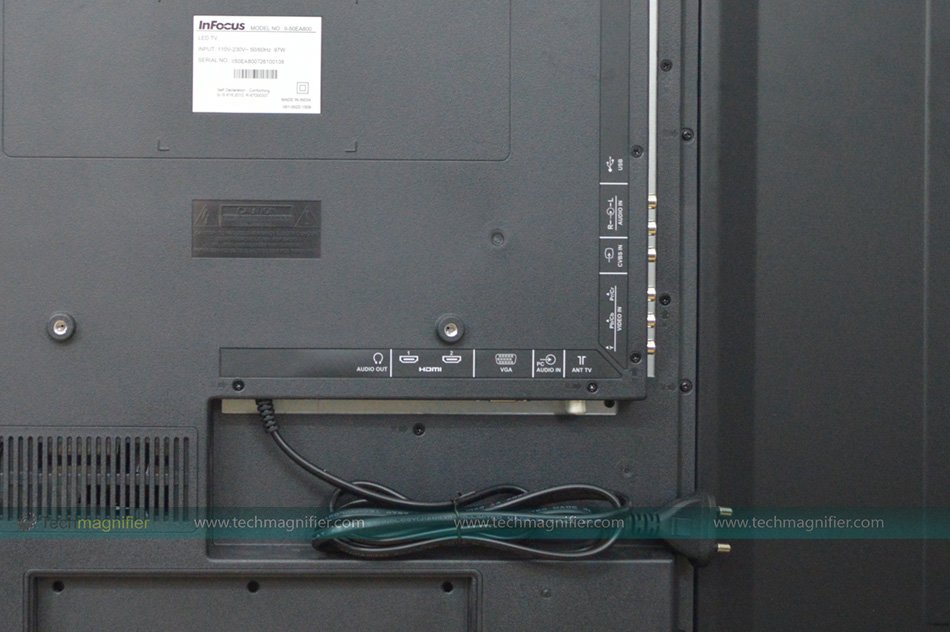 InFocus II-50EA800 has two HDMI ports and one each of Composite Video In/out, AV In, VGA, PC Audio In, Headphone, RF and USB. The TV has no wireless or wired internet connectivity, DLNA or optical audio port on II-50EA800. HDMIs are limited and if you plan to attach a streaming dongle, you wouldn’t be able to add another HDMI connection simultaneously (the port are too close).

No subtitles or audio change option is available in USB playback menu. Resume memory is limited to one file, move on to the next and you cannot resume on the previous ones. After entering in videos, you still need to look for files in folders it doesn’t filter out all files and show it in one list like you see on your phone’s video player. But it was able to playback most file types, including 1080p or lower MKV, MP4, AVI and WMV formats. 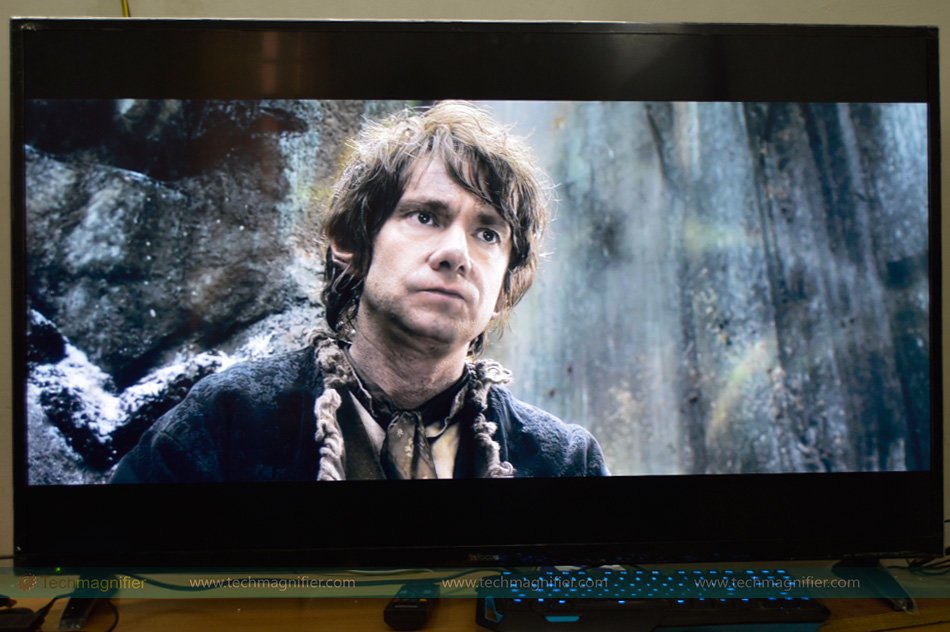 The final and most important aspect of any TV got us to give it a four star rating, despite many of its shortcomings.

The InFocus II-50EA800 uses a bright LED backlit panel from Innolux. The direct LED technology or DLED as it’s called is one of the most cost saving arrangement of backlight a TV can have, as explained above. So we weren’t expecting anything super from the TV, be it black levels, dynamic contrast or anything vivid.

But leaving the contrast part, everything worked pretty much for the TV. It was surprising to see deep blacks and subtle grey tones perfectly executed. On the 1080p files we played, the color contrast was good too mostly, but it varied drastically with the file types used. 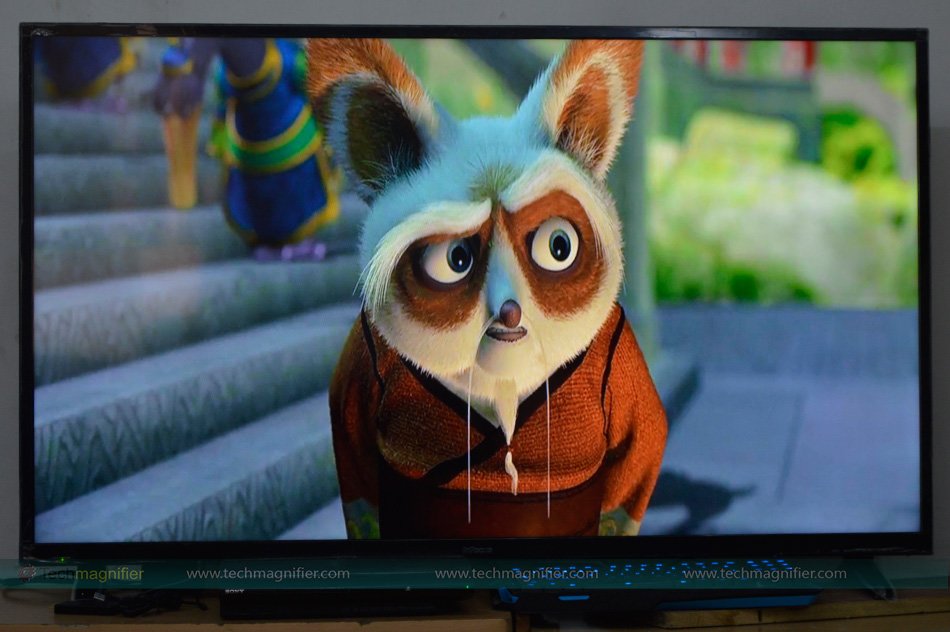 The nice thing about InFocus II-50EA800 is the way colors are rendered. Without overdoing, the colors are almost saturated over the screen. Without crossing boundaries, they are intensely used and still maintain a very soft and warm effect on the eyes. Give it the content and the TV has the capability to bring it to life.

There aren’t many methods to calibrate picture quality on the TV and it won’t be true to say that you don’t need any. Till the 720p resolution or HD channel, things are good. But drop below it and things can get dirty. Obviously though, SD channels don’t make sense on a 50 inch TV, yet time and again, you may need to tweak its picture settings to get the best results. There is no up scaling or other software based enhancements to better display SD content.

At times you also feel the stark disadvantage of a DLED panel, having witnessed dynamic dimming of backlight work it wonders. But you need to remember always, the amount you paid!

A 50-inch screen with colors that are deep and accurate without making the picture over saturated is what one can look for in a TV at this price. Though there are several shortcomings, the TV’s build quality and picture quality both stand out. If you are looking for TV, plain and simple yet as big as possible in the sub 35k bracket without compromising big on picture quality, InFocus II-50EA800 is an option you couldn’t exclude.