The novel technology of curved OLED TV has addressed many issues that plague a normal TV and enhanced 3D viewing in more than one ways. But it price proposition is way beyond the bargain that you get.

Just after finishing the Samsung Curved UHD TV, what interested me next was the LG curved OLED TV. As thick as the watch strap, the LG55LA9800 is a red dot design award winner. After all it weighs just 17Kgs and with a crystal stand and see through speakers at the bottom, it looks so thin and beautiful.

But winning beauty pageants would be a petty thing, for the technology it entails is as tricky and subtle as a tongue twisted deepest saying. But it comes at a price that too is not easy to digest.

I have seen minds going helter-skelter while trying to put a logical reason to its price tag of 9 lac rupees (which has been brought down to around 5 Lacs now). Are these TVs built really for enhancing picture quality, resolution, immersive-ness and elegance in the least? Do they come with a purpose, a definitive audience to cater to? Or it’s just a company’s bet to be ahead in the technological rat race; thanks to the high-tech production line… are the different opinions I have to take even before I speak anything about it.

This new technology breaks many high grounds set by LCD screens in almost every aspect of the image quality be it clarity, black levels, contrast, passive 3D and what not. Plus problems like flicker, blur or interlacing doesn’t exist. Read yourself.

LG Curved OLED is the first of its type to land in the market. Every other TV uses a panel made up of Liquid Crystals that dance to the tune of electricity; varying the amount of light, coming from the backlight, through them, from all to nothing. When the backlight shines through the panel containing LCs, blacks, whites and their different shades are produced at TV screen. If back light is not a single source but LEDs spread out all over the back surface or lined up at the edges (edge-lit) or both, the TV is called an LED TV, which is nothing but actually an LED backlit TV.

The OLED is totally a different breed. They only have LEDs, no LCD panel at front. They are so tiny and so many in numbers, that they can produce their own imagery. And instead of the RGB color pattern that LCD displays follow, the LG OLED produces white as well, and passes it through a color filter.

The LEDs are made using an organic conducting layer, etched onto a surface. There are various means to do that but the current price means industry is still looking for a cheaper scalable solution.

The picture quality now depends on the number of LEDs etched per inch. Higher the count, more the resolution. But it’s difficult process. And there’s a limit to how many small lighting units you can place in an inch. Hence the resolution is currently limited to Full HD. As I write, I am sure plans are being made, setups getting readied and all initial test reports fitting for the production of 4K OLED TVs. But for now, there’s a lot of delight to take from the stunning contrast that this full HD TV exudes.

So far as the theory goes, an OLED would have better contrast, color reproduction, black levels and ultimately the picture clarity. But does that translate well in practice.

During the review we used HD and Full HD content that the TV is capable of playing. With an HDMI source hooked to the screen we stood with fingers on the chin, ready to find any flaw whatsoever in the picture quality. And we got it as soon as a video started. The picture was grainy as if the content was SD (it was Full HD).

Confused, we carried on, the black levels never getting less than amazing and every other element clearly visible in the Batman movie as if the scene was getting shot front of us. In darkness every other element intended to be visible was like glowing, it had its own color, its own shine. This is what LG means when it says the TV has infinite contrast.

Retiring further away from the screen after setup and first few minutes of witnessing the playback, we noticed that the noise was no more visible. The picture quality now appeared to be truly amazing, even with the room fully lit.

It’s not like the UHD TV that you can watch up close and the curve is also less tight so the proposition of a sweet spot does loose its credibility. The immersive-ness, obviously wasn’t there, but the picture was exuding life-like colors and imagery from everywhere on wide viewing area it has.

The curve helps a little, to ward off reflection to certain extent and improve viewing angles. But since the screen needs to be viewed from far away, there’s no point in the fighting for immersive effect. But look at it from design perspective. It so not flat and that saves it from irritating calmness a big flat TV exudes. 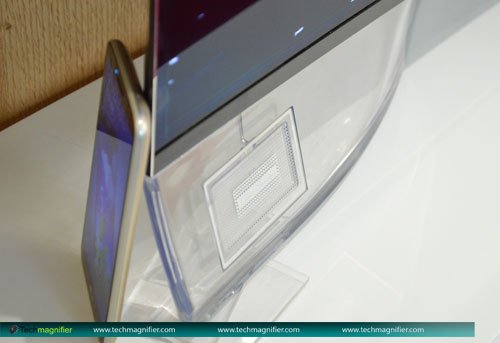 The panel itself, which is as thin as a pencil tip, is placed on crystal stand and has carbon fibre put at the back to make it tough, good looking and light. A crystallized translucent glass supports the panel and balances the TV on a surface.

You will definitely be surprised by speakers that are put in the stand at font and the speakers are nothing but a thin food wrapping foil that seems to be kept as a design element that works. You would anyway need a good home theater for good sound. 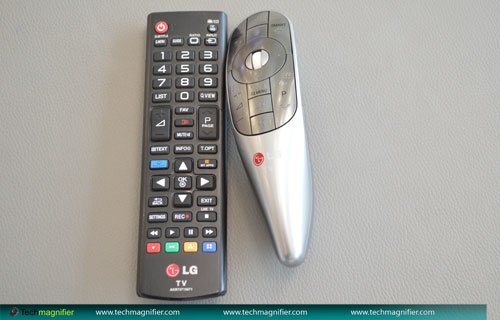 As great and novel feels the picture quality, so ancient would you feel while controlling the TV. The smart remote called the magic remote, with a stick-like holding area is made of slippery material that shows no signs of creativity. For the smartness part it has a scrolling wheel which upon hard pressing brings a big triangular pointer on the screen. The irritating pointer will take 5 seconds to vanish again.

The smart remote will be required to navigate the SmartHome interfacfine, a place you find all the stuff like apps, games, online content, browser, Radio, music player and everything else the TV can do. For the record and relief, there’s a smartphone app so that you can use your phone as a smart controller. A bundled ‘normal remote’ that has numbers on it, much better grip, much softer keys that you can always use. 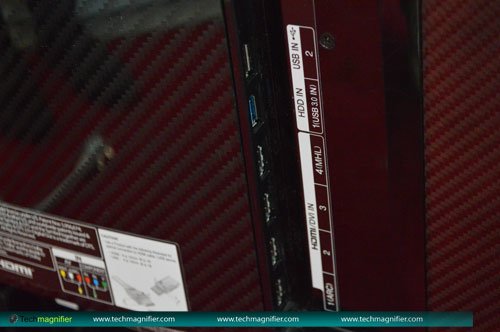 The connections are still needed to be done at the back and as a TV that can’t be wall mounted; connecting things will likely be less frustrating. It has 3 USB ports plus one for connecting a camera that has to clipped on to the top of the TV; 4 HDMI 1.4 connections, a LAN port (it does have Wi-Fi), one component and composite In each and audio out (optical and 3.5mm). 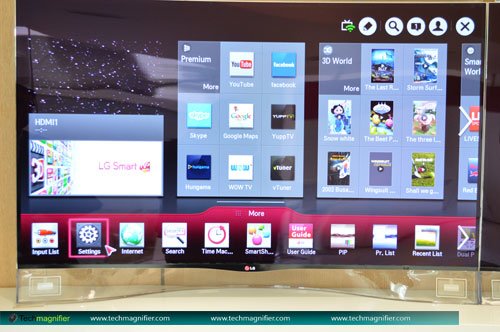 The SmartHome interface too doesn’t make you feel at home. The screen is divided into panels, so while operating from a distance it’s difficult to figure out where things really are. The scrolling wheel doesn’t work anywhere other than with the browser and

There are differences in various regards but both being a TV after all, Samsung’s curved UHD TV is way ahead in all three departments. 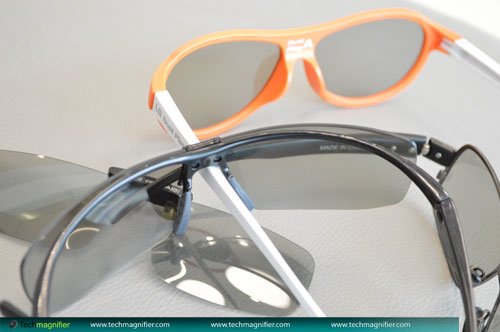 LCD screens have managed good refresh rates and blur free picture up to some extent. So the 3D capability has also been getting better with active shutter technique. But 3D experience on OLED was something else.

Whether on a movie theater, projector or TV screen, 3D always have had brightness issues. We have seen gaming monitors like the Benq XL2420XT working hard, eking out brightness to keep the view behind the glasses clear.

OLEDs make it look like a child’s play; with clarity no other TV ever could. It is as bright as 2D picture with its designer 3D glasses that require no batteries, charging or pairing. This is because the 55LA9800 uses passive 3D. And this is the very reason the 3D is not only bright and clear but being less strenuous to the eyes, is very comfortable to watch. Its wide angle too, i.e. the viewing angles are as high as that of 2D. 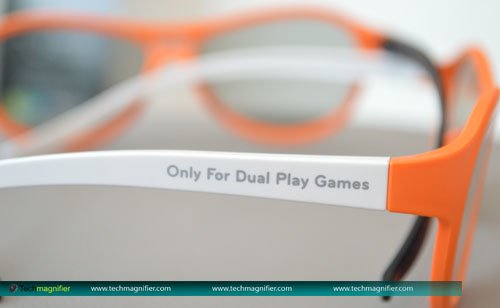 Another interesting thing, other than designer glasses and clip on glasses (attached onto spectacles) are the multiplayer gaming glasses that would allow two people to see different screens simultaneously. That is the screen can run two different videos simultaneously, one over the other. Which one is visible and to whom depends on which 'Dual play' glasses they are wearing. It proved exciting to play multiplayer games without screen division.

OLED is the latest innovation happening with the TV technology that has not only allowed the TV to be made into a piece of exquisite art but great in everything it is intended for. It’s not just a TV, it's a piece of workmanship that is sure to accentuate the aura of the place where it lives. The botchy smart controller aside, the TV has great bright picture and color reproduction, wide viewing angles and contrast-on both 2D and 3D. But for a real warm welcome from crowd, the technology needs to find an economical pathway of creation. And this will take time.