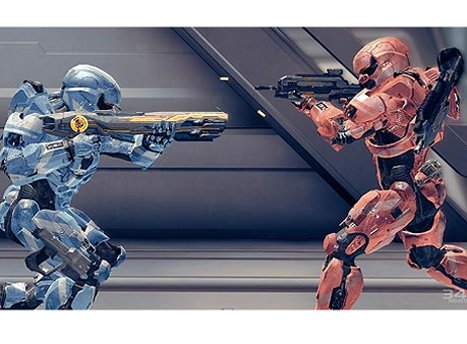 Halo is once again adamant about proving its supremacy and competency in the gaming world with the release of its new series, Halo 4. The latest addition in the franchise marks the beginning of new trilogy in the Halo universe. Also, the game marks the return of its hero, Master Chief.

Direct sequel to Halo 3, the latest addition to the series sees the resurrection of Master Chief, who is all geared up to take down the enemies once again. Not to forget, this time Master Chief, a cybernetically enhanced super soldier will be facing his worst nightmare from an ancient evil, which is adamant to threaten the fate of the entire universe. Developed by 343 Industries, this first-person shooter video game also showcases Master Chief fighting against Covenant forces and a new foe, Forerunners (A race who created Halo)

Accompanied with his AI muse, Cortana, who will be assisting him throughout the mission, Master Chief will be seen exploring the Forerunner Planet in order to stop the enemies. Halo 4 takes on the story from where Halo 3 ended, with Chief slumbered on the wrecked starship and Cortana battling her seven years of AI lifespan, which is soon to end. It is up to the Chief to reach the nearest UNSC warship and get Cortana treated as soon as possible. But, the question is, will our hero escape and reach the ship or just see Cortana vanishing from his sight?

We have known Halo since long and we also know what it is all about. But Halo 4 comes with some interesting tweaks this time. With more armor abilities and access to shields, visual, stealth and other upgrades at various levels in the game, Master Chief is all geared up to gun down each one on his way. And in Halo 4, you will be facing a new horde of enemies to content with. Master Chief will be standing against the enemies like Forerunner Prometheans to fast-moving critter like creatures to aggressive knights with teleport abilities.

Though game is played from a first-person perspective but it can be changed into third-person, when Chief uses certain weapons, vehicles and armor abilities. The graphics and interface has been brilliantly designed; this has enabled the heads-up display (HUD) of players to provide real-time information on the current weapons, armor system's current shield status and also displays goals & objectives of the game. The HUD also makes the players aware of the enemies and vehicles within a certain radius and helps in detecting the allies.

343 Industries must have gone through a lot of hard work and faced immense challenges while designing the game. After Bungie handed the series to 343 Industries, it does have become a big question for the developer how to take the trilogy forward without eradicating the fanboys. Also, the game has been designed in order to get the new Halo players hooked up to the series. The game opens with a cut-scene where you will find the main protagonist, Master Chief drifting through space in the remains of Forward Unto Dawn, the super vessel, which was destroyed during an attack.

Luckily, Halo 4 comes with a new gamut of weapons and stealth abilities of Master Chief. Assault rifle, shotgun, carbine classics and magnum guns are some of the deadliest weapons that will help Master Chief in executing the incoming horde of enemies. Though the game keeps on moving without the explanation, it still looks fantastic while you are in killing mode and move forward shooting down the enemies. Game’s interface and art design make the play more interesting and enjoyable.

The best part of the Halo 4 is its Multiplayer Mode, which is Halo’s USP. Talking about the gameplay, it is fast and does feel like a twitch shooter at some point. Though the power weapons still need to earned, players can pick the armor abilities and primary weapons from the list. Spartan with the powerful MJOLNIR IV armor, this time Master Chief is access to weapons with far shooting range and infinite ammo. Spartan Ops is something new addition in the franchise, in which as a player you will enact the role of Fire Team Crimson team member stationed on Requiem after the events of Halo 4. So, get your console ready and order the game and start reloading your gun, because you have lot more to kill on your way.

Soundscape and graphics are sure to mesmerize the players. And with varied number of Halo 4 Reviews being updated each minute online, you must have guessed the popularity and reactions of the Halo lovers. Best played on Microsoft’s Xbox 360, the game is touted to be a biggest FPS series ever made. We tested the game and to be honest for the first time players, it is sure to be a thrill ride. The gameplay and story have been complemented in such a beautiful manner that you will hate to put your controller aside. Halo 4 has been priced INR 3, 299 for the Standard Edition and INR 4, 599 for the Limited Edition.